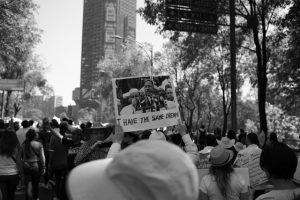 Martin Luther King Jr. called riots “the language of the unheard.” Waking up today, the news of riots in several major U.S. cities is a loud cry from those who have been unheard for generations. The murder of George Floyd, who died with his neck under the knee of a police officer, was the last straw for many. We should not be surprised by the expressions of frustration, pain, anger and rage. The unheard cry, the unheard scream, and then they react physically, just as would any child to a parent that is unresponsive to some genuine need of theirs.

The mayor of Atlanta Georgia, Keisha Lance Bottoms, an African American woman with a family of her own, said at a press gathering Friday that she feared for the safety of her children. “When I heard that violence was erupting in Atlanta, I said to my 18 year old son, “Where are you? I cannot protect you. Black boys shouldn’t be out today.” When I heard that, my heart sank. Friday morning, Prime Minister Trudeau said in Ottawa, that racism is not only an American problem, it is here too. We should not be surprised.

British philosopher, Edmund Burke famously said, “The only thing necessary for the triumph of evil is for good men to do nothing.” The murder of George Floyd and the emerging long needed conversations about race in North America that are being had is a reminder to all of us to challenge our social conditioning and how our own behaviour contributes to it.

Van Jones, an American political commentator, suggested in a recent interview, “When you call people out you lose your audience. The Mayor of Atlanta was calling them up. You could feel underneath the anger and rage, her love for her city.” Martin Luther King Jr. stated it in profound fashion: “I believe the unarmed truth and unconditional love will have the final word in reality. That is why right, temporarily defeated, is stronger than evil triumphant.”

Oh how we need these reminders today. Ultimate strength resides in selfless love for others. It is the message borne in the cross of Christ. Jesus did not sacrifice himself and suffer crucifixion to rescue those who match his view of a good person. He died for all of us – we, who cannot reach that height nor become that person without him.

We need to be more vocal in “calling people UP”, and in reminding one another of our true, deep and eternal value before God. Recall this tremendous declaration from the first chapter of Genesis – “Then God said, “Let us make humankind in our image, according to our likeness”. We can do more to search for, and uncover God’s Spirit, however buried it may seem to us in any person.

“[Everyone] must decide whether they will walk in the light of creative altruism or in the darkness of destructive selfishness,” said Martin Luther King Jr. “I’ve decided to stick with love. Hate is too great a burden to bear.”

In these times of confusion and conflict, let’s keep asking each other for help in sticking with love.